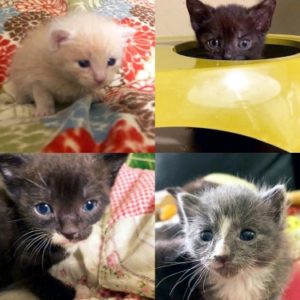 With Kitten Season in full swing, the NYC Feral Cat Initiative has had a very busy month. Spay/neuter services in the New York Metro area have been dramatically reduced due to COVID-19, resulting in an unusually high number of kittens being born to community cats. Still, by working with Bideawee’s Adoption Center and others in the rescue/sheltering community, FCI has been able to help dozens of community kittens from all over the city come in off the street and find forever homes. Several of these helpers are new volunteers who took one or more of FCI’s community cat care webinars.

Some of the adorable kittens we helped include a multicolor litter of neonates from a rescuer in the Bronx whose health issues made it hard for her to bottle-feed them round the clock. FCI found a volunteer in Staten Island who had taken our Bottle-Feeding webinar, transported the kittens to her, and when they were old enough, the kittens went to Bideawee for adoption. We also found a foster for a litter of four all-black boys and their nursing mom, rescued from a Brooklyn backyard. Their rescuer couldn’t continue fostering, but a woman in Queens who had taken FCI’s Taming Feral Kittens webinar, stepped up to foster them until the kittens were ready to go to a private shelter and the mom could be spayed for adoption. A Long Island resident who had taken FCI’s Trap-Neuter-Return (TNR) workshop called on us for help after she rescued two sickly little tabbies from a Queens backyard. FCI was able to get them to into a private shelter almost immediately. Big thanks to our rescue, TNR, and foster communities, and to everyone who plays a critical role in helping to care for New York’s must vulnerable feline residents.

Learn more about how you can help community cats.