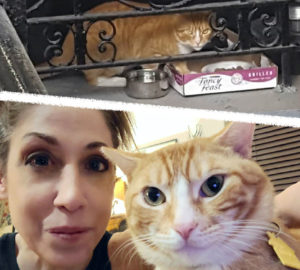 Unbeknownst to her, the cat had caught the attention of several neighbors who were trying to help the kitty but running into the usual obstacles. Susan named him Goose, and she was determined to get him vetted, but she needed a trap, a trapping coach, and a holding space for him to recover in after surgery. Goose also needed a place to go permanently; he was a newcomer to this block and had survived there only because he could take shelter in a construction site. Susan had never been able to touch him so she didn’t know whether he could be adopted into a home or would need barn placement.

We lent Susan a trap and taught her how to set it up and lock it in the open position so Goose could get used to the trap. Meanwhile, Susan lined up a vet appointment and agreed to foster Goose if he turned out to be friendly.

The “trap training” worked; a few days later, Susan set up the trap and Goose walked in. Susan covered the trap and whisked him upstairs to her bathroom to await surgery. He wasn’t a happy camper and showed no sign of wanting to be pet. A member of the FCI team agreed to care for Goose post-surgery and set him up in a large dog crate with a cat carrier to hide in. After a day, Goose came out from hiding and let her pet him while he ate, but he neither loved nor hated it. She kept giving him petting sessions until he finally started rubbing his head on her hand. Then came the roll on the back and a tummy rub! Susan was ecstatic and prepared her bathroom as a foster room. If only Goose could get along with her resident cats, he’d have a home with her. And that’s exactly how it turned out. Goose now has a collar, microchip, and a forever home, and Susan, and Goose’s neighborhood fan club couldn’t be any happier. “Goose’s story affirmed for me that it takes a community to help community cats” said Susan. “We didn’t know if he was feral and so a lot of planning had to go into his rescue, with multiple scenarios depending on the cat himself. There was no way it could have been accomplished without the coordination and hands-on assistance from Kathleen O’Malley and the NYC Feral Cat Initiative.” These happily ever afters are the result of the collective efforts of so many, but every life saved makes it all worthwhile!