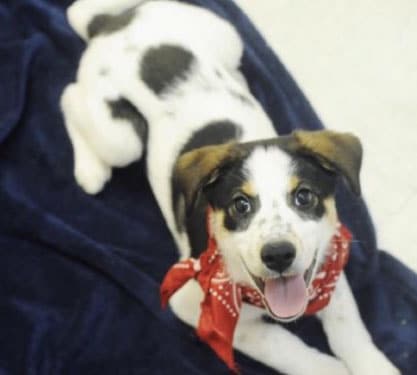 My fiancé and I had been considering getting a dog but we were on the fence about it. We both worked full time jobs, I was about to start graduate school, and we were worried we didn’t have the time. We researched various breeds and then came to the decision that if we were going to get a dog, we should adopt one from a shelter or rescue.

We lived a few blocks away from Bideawee at the time and first visited on Saturday, February 2, 2018. Hudson had actually already been adopted at that point. After playing with a few dogs, we thought we should take some time to think about it. So much for “taking some time to think.” Three days later I received a text from my then boyfriend (now fiancé) from work… “This dog was just posted to Bideawee’s website. Should we go meet him after work?” It was a photo of Hudson at three-months-old with a red bandana around his neck… he was SO cute!!! A family had adopted him without knowing that someone in their family was allergic to shedding dogs, and had to return him. Five hours later, we were adopting him! It all happened so quickly. We carried him to Petco (because he didn’t have all of his shots), and got all of the supplies we needed to take him home. Bideawee made the process so seamless and easy for us. I (naturally) had a million questions and they very patiently answered every single one of them. They even picked up the phone every time I called with questions in the weeks following!

Life at home with Hudson has been so great! It turns out, we were not too busy for a dog after all! If anything, he has helped us manage our time so much more. We have explored so much of New York City with him, just by the sheer amount of exercise he needs. We walk all over! We love to take him hiking outside of the city too. His longest hike so far has been 13 miles! We love our Huddy boy and are so grateful to Bideawee for rescuing him so that we were able to adopt him! He brings so much happiness (and a lot of sweeping) into our home. When we eventually have more space, we may be getting him a Bideawee brother or sister!