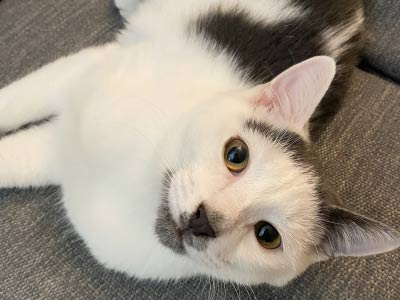 Is there a better cat in the world than Mister Coconut? He is soft, fluffy, and has the funniest little mustache.  And it’s a good thing that he’s so adorable—because he’s not the most graceful or energetic cat! He often falls off of the couch while chasing a toy and barely lifts a lazy paw to swat at the laser pointer, pursuing the elusive red dot only when it’s directly next to him, never chasing it across the room.

If I had to choose one word to describe Mister Coconut, it would definitely be “loving.” You see, Coconut is what I call a “post-breakup cat.” After experiencing a major heartbreak at the beginning of summer, I was a shell of my former self. Lots of ice cream, lots of rom-coms on Netflix, lots of tears – you get the idea. Unable to stand another day of my wallowing, my roommate, Hannah, decided it was the perfect time to pull the trigger on the cat we had wanted for months. Thus, began our search process.

It was still the middle of kitten season, and we were blessed to find Coconut on Bideawee’s website relatively quickly. After the application, a short phone interview (and a quick double-click to order cat carrier for 2-day delivery!), we were invited to meet and ultimately pick up Coconut! When we arrived to the Bideawee kitten area, there were actually three kittens there to greet us—a shy gray one named Smokey, an energetic one named Toffee, and Coconut falling somewhere in the middle; neither shy or friendly.

After we brought Coconut home we quickly found out that the shyness was just an act since Coconut proved to be the cuddliest cat ever! If I’m sitting on the couch, he plops himself in my lap. If I’m working at the coffee table, he sits on my laptop, and If I leave the room, he follows. So many of those post-break-up feelings I mentioned earlier quickly began to vanish because suddenly I wasn’t alone anymore.  And let’s face it, it’s awfully hard to be sad when there’s a purring ball of fur in your arms!

This is such a cliché to say, but now I can’t imagine my life without Mister Coconut. His sunny little face greets me every morning, and his excitement over treats never fails to make me smile. I’m so grateful to Bideawee for bringing this little guy into my life! But don’t just take my word for it, follow him on Instagram at mister_coconut_thecat. You’ll quickly see the joy and transformative power that pet ownership can have in your life—and sometimes that power comes just when you need it the most!