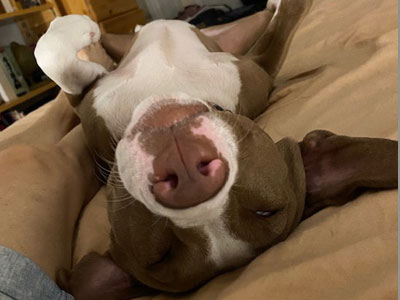 Last summer, at the height of the pandemic in NYC, my husband and I had to say goodbye to our beloved dog, Blue, after 11 years. While we were grateful to be able to be with him at the end (not a given, under lockdown circumstances), we were heartbroken. We never doubted that there would be a dog in our lives again eventually, but we took some time to grieve, feeling sure that we would know when the time was right.

In January, when our apartment started feeling too empty, we started looking for our next canine family member, hoping for a young, female, medium-sized pup with a temperament suitable for future training as a therapy dog.  We hadn’t anticipated the difficulty we encountered! Because so many people in the city had been adopting furry friends to keep them company during lockdown, there weren’t many dogs readily available. We searched for weeks, and started putting in applications almost daily once we realized that the demand was still high.  A little blue-eyed beauty, then named Klein, appeared on the Bideawee website, and we put in an application immediately, only to find that once again, someone else had gotten there before us. We were accustomed to disappointment by this time, so we resigned ourselves to returning to our search. Then we got an email from the adoption team saying she had become available again, and asking if we were still interested. I emailed back less than 5 minutes later, and the rest is history. Two days later we met her, and it was love at first sight.

Her name is Lucy now. She is love personified. Her friendly demeanor and striking blue eyes attract attention whenever we go out, and she is constantly making new friends (both canine and human).  There are frequent trips to the local dog run, where she is a very popular girl, so she can play with other dogs and run off some of that seemingly boundless puppy energy. She also enjoys walks in the woods, where she is constantly on squirrel patrol. She loves her new stuffies (especially the squeaky ones!) and is learning to chew on her chew toys instead of our socks and feet. We’re working on obedience training and leash manners; she’s a smart girl and catches on quickly. We look forward to pursuing her Canine Good Citizen certification once she’s ready, so she can become a therapy dog when she grows up.

She has brought such joy to our home! Thank you to Bideawee for bringing this sweet girl up from Georgia so she could join our family.